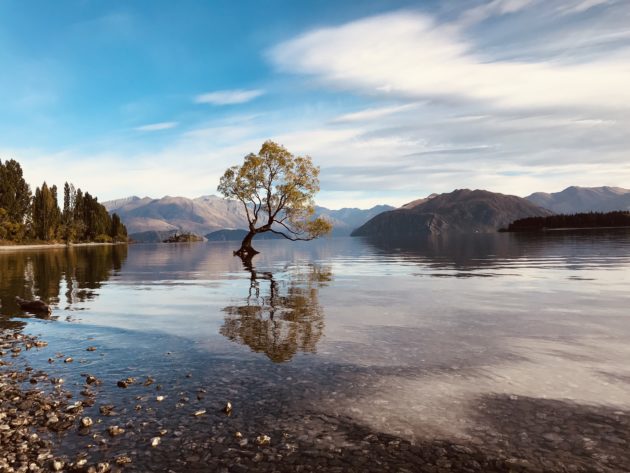 Beginning in Brisbane Australia, enjoy a four day layover in an elderly 1886 built lodging called the One Thornbury Boutique B & B. Across the river, is South Bank, the cultural heart of ‘Brissy’, and we stroll along a path tunneling through a half mile of huge metal arcs. Smothered in a carpet of bougainvillea vines, it resembles a Pepto Bismol colored rib cage of some colossal prehistoric serpent.

After a good wander, a River Cat drops us further along the river at New Farm Park for lunch, at a collection of 180 kaleidoscopic shipping containers forming the iconic Eat Street Market. Back in town a ruckus emanating from huge upside down bats with beady orange eyes, and while nimble of wing in flight, the squeaky rodents are a comical mess in motion moving about in the tree branches, stumbling about like inebriated mini monkeys.

Four days pass in a flash, and we fly on to Christchurch to truly begin our trip. New Zealand just begs to be explored on four wheels and we embrace the idea, knowing full well that this striking country should come with a pause button. After driving halfway across the south island, we stop in Arthur’s Path National Park as our curiosity is piqued by the oddball Otira Stagecoach Hotel.

This quirky 154 year old museum/hotel started out as a stagecoach stopover in 1865, and is now home to an amazing assortment of intriguing oddities, from Wild West memorabilia to a pool playing possum. The place has a Lord of the Rings theme to it, and as we approach, we are greeted by a grimacing Gollum, perched atop the roof and dangling his golden ring. Now, isn’t that just ‘Precious’?

Humped and revoltingly soiled carpet laid in a previous century, covers spongey floors on the verge of a breakthrough courtesy of the royally rotted supports below! However, the particularly peculiar place is an intriguing break before hiking up to a waterfall called the Devils Punchbowl.

After a night in Greymouth, we follow the Tasman Sea south to Franz Joseph Village, disappointed to learn that heavy rains in this rather unstable area have caused a huge slide, blocking our intended trek to a glacier of the same name. We settle for an amble around Lake Matheson, then still keen for green, hike a fern-festooned forest and enjoying the mysterious warbles emanating from deep within the frond fest.

With the sky still leaking after a pair of nights, we push further south to Wanaka, crossing many of the 49 skinny single lane bridges plaguing the island. Reaching our destination, we stretch our legs walking the shore of the lake, and see possibly the most photographed tree in the world. The iconic 100-year old ‘Wanaka Tree’ is marooned out in the cool waters of Lake Wanaka, looking like a gorgeous calendar page.

In the early 1900’s the tree began its life as a fence post when a sheep farmer chopped the branch off a large willow and plugged in the shallows off shore as part of a fence to restrain his herd. The determined willow however, was apparently uninterested in life simply as a fence post! Wanting more, and displaying a tremendous will to live, the solitary post that couldn’t be drowned put down roots, growing slowly into the stunning phenomenon now miraculously growing out of the lake.

Today’s plan is to engage our inner mountain goat by climbing Roy’s Peak; a challenging 16 km hike with 5,177 feet of vertical in Mount Aspiring National Park. Zigzagging up the breath-robbing, thigh-straining slopes, we finally crest the summit; going from “grin ‘n’ bear” to “stop ‘n’ stare”, with our eyes like thirsty sponges soaking in the majestic vistas we have worked so hard to attain.

After a well-deserved break atop the mountain we’re ready for the hard part; uphill hurts, but downhill destroys! With our catastrophic calves twitching like Medusa’s hair net, and the unrelenting repetition of our toes punching the ends of our shoes, our descent morphs into a hobble-fest towards the end of our taxing six hour scramble.

Dinner is a well-deserved concoction of items in what’s called a ‘Buddha Bowl’, at a restaurant called Kai Whakapai; a Maori name meaning ‘food made good’, and humorously pronounced as ‘Kye-fuck-a-pie’. Four delightful days in Wanaka trot by far too rapidly, but due to other commitments, it’s time to once again get the rubber rolling.

Near the minuscule township of Cardrona Village, we pause at an immense collection of feminine lingerie dangling from a roadside fence. Rumor is that group of women got seriously sloshed at Cardrona Hotel many years ago and decided to shed their brassieres, hanging them on the fence in honor of a friend with breast cancer. As news about the ‘Bra Fence’ spread, it inspired more and more women to unhook and deposit their own flopper-stoppers. These bosom-buddies hanging out together on this humble Kiwi fence provide a titillating and unde-niably fine show of ‘support’ for the cause, fluttering proudly in the breeze!

Driving the exhilarating Crown Range Road linking Wanaka and Queenstown, is certainly not for the faint hearted, being the highest main road in New Zealand and reaching an altitude of roughly 3,700 feet over treacherous hairpin switchbacks that mimick a seismograph registering an earthquake!

The roads from congested Queenstown to Glenorchy reveals New Zealand in the raw, and we repeatedly slam on the brakes, shouting expletives as gasp-inducing scenery unfolds before us. This country is  all about the outdoorsy stuff, and after a bush walk to a turquoise-toned inlet called Bob’s Cove we arrive in sleepy but charming Glenorchy. Made famous by movies like the ‘Lord of the Rings trilogy’ and ‘The Hobbit’, the itty-bitty village’s stellar surrounding landscaping truly does look like Middle Earth!

Our lodging is next to a field of sleek horses grazing with stunning mountains as a backdrop, and from Glenorchy Wharf we hike a boardwalk beside Rees River, with Black Swans and Paradise Ducks patrolling a lagoon overlooked by Mt Earnslaw. Alone with my thoughts, I accidentally set off a powerful possum trap, resulting in a high jump and adrenaline gland squirt I’m sure would rate at least a 9.5 with all Olympic judges! It is definitely time for a beer stop in the eclectic Mrs. Wooly’s General Store.

Leaking clouds await us at the start of the Routeburn Track, and waiting in the carpark anxiously hoping for the sky to stop misbehaving, we’re joined by some endangered Kea Parrots. The boisterous birds are the world’s only alpine parrots and look fairly plain on the ground, but taking flight, morph into brilliant flashers with vibrant flames of red and orange flashing from the underside of their wings.

Christine is the only one with a raincoat, and getting out of the car to take the birds photo, she gets into an entertaining game of ‘kick the can’ with one of the devious but comical birds. It has found a tin can somewhere and repeatedly fetches it after it is kicked away; rolling it back to her feet like a dog fetching a stick. The cheeky little bugger’s antics are an entertaining interlude while waiting on the weather.

After a long wait the solid drizzle mutates into Noah-like rain, and with no rain gear, I know any attempt to hike the long tract is not going to end well given my susceptibility to hypothermia. Renouncing our hike, we motor towards a spot called Paradise. We come to a section of gravel road blocked by a flooded stream, and with the washout too severe to cross without a four-wheeled drive, we stop and build it up with large rocks in order to bully our rental Toyota Camry safely across.

The next leg of our adventure takes us to the teeny town of Twizel. After finding our lodging we want to take advantage of improved weather, and begin our drive following the too-perfect-turquoise-to-be-real Lake Pukaki, with the glaciated beauty of New Zealand’s highest peak, Mt Cook, getting closer with every mile. Arriving in Aoraki/Mount Cook National Park, we begin a hike through Hooker Valley.

Much of the scenic hike is on a boardwalk meant to protect the delicate eco-system, but we’re worried that if the day gets any windier we might take flight! Crossing three swing bridges, we reach the track’s end, coming to a grit covered iceberg floating in Hooker Lake. The timing is perfect as clouds briefly clear, allowing a peekaboo view of Mt. Cook. It’s been a zonking day, and driving back to Twizel we pick up fish and chips for dinner, surprised to learn the fish we’re eating is called the ‘long snouted elephant fish’.

Mornings and nights are a shivery affair, and we’re grateful our warm Merino wool sweaters and gloves. NZ has over three million of the curly-horned Merino Sheep, with 97% residing right here on the south island, as the bleating baaa-d-asses are blessed with a carpeted carcass resilient enough to handle the frigidity. In addition to Merino clothing, a few shops also offer an interesting item made of insulated possum fur to guard one’s manhood. It is called a ‘willy-warmer’, and with the arctic air here in Alpine Country, I’m giving serious consideration to becoming a customer!

Oamaru, known for its steampunk culture, is our next layover, so we can explore the fascinating Moeraki Boulders on Koekohe Beach. The spherical “stones” scattered along the beach were originally formed in ancient sea floor sediments around 60 million years ago. At almost two meters in diameter, their surrealism has many questioning if they may be either alien pods or dinosaur eggs.

Through erosion, the buried boulders occasionally birth themselves from the clay banks of the cliffs, and over time, find a new home by rolling down onto the sandy shores. Many of these ravishing rocks are patterned akin to the back of a tortoise shell and leave us marveling at nature’s rugged artistry.

Winding down our travels in ‘Windy Wellington’, the southernmost capital in the world, we’re immediately molested by a rowdy wind validating the city’s drafty reputation. Still, it is a vast improvement over the bitter weather awaiting us at home; Victoria’s second coldest February on record, with 23 days reaching below zero and the most snow in that month since 1941!

Our Kiwi time has been delightful. The hospitable folks always seem up for a laugh, and their stunning country has once again exceeded expectations with its applaudable natural beauty.