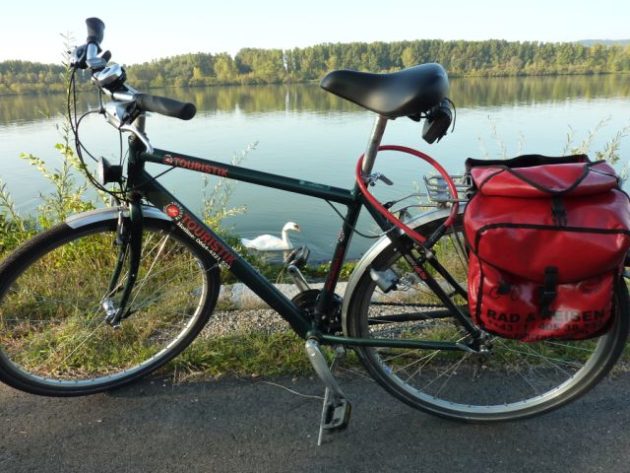 With our passports desirous of another smudge, we’re off to Europe on a September sabbatical; keen to spend our ‘fallidays’ cycling the Austrian countryside and hiking in the mountains of beautiful Slovenia.

From Munich Germany we train to Passau and collect our bikes, eagerly setting the wheels in motion for a ride that will cross the border into Austria and ultimately take us right across the country to Vienna. Though we are cycling through countryside signposted with baffling village names that look more like a bad scrabble hand, our relaxing ride is almost like a ‘cycling for dummies’ as we pedal along a crepe-flat path following Europe’s longest river; the mighty Danube.

While the river may not be blue, the cloudless skies above certainly are. Our spectacular fall days begin with a chill, but generally warm up to the mid-twenties as the sun climbs towards noon. The scarcity of rain is unusual for this time of year, and we’re as happy as cats in cream to leave our rain gear stowed inside the panniers. Pheasants and rabbits often scatter in front of us as we cycle past.

Residential properties all seem to have gardens defended by countless gnomes in red pointy hats. Using some mental floss we try removing the images of the bushy-bearded dwarfs from our brains, to make room for the more memorable moments, including a scrumptious wild boar dinner in the quaint village of Pochlarn, the grandiose world heritage abbey at Melk, and a trainload of girls blowing me kisses in Krem.

River swans scull about with head and necks forming question marks, while fishermen patiently ply their craft along the banks. The abutting hills are also easy on the eyes; with the ancient castles, churches, and stone forts sculpted into them. Painted with vineyards, the Wachau Valley makes for a perfect place to step out of the saddle and sample some of the area’s quaffable liquids! Between Passau and Vienna, our nightly cycling stopovers include nights in the towns of Linz, Grein, Pochlorn and Krems.

Our days begin by guiltlessly grazing at the breakfast buffet, followed by pillaging a cache of goodies to fuel the hours atop our bikes during the five consecutive days of riding of 83, 70, 71, 51, and 45 km. Though our hefty bicycles aren’t exactly Tour de France material, the cycling is a piece of cake given the terrain is as flat as a flounder. Each day culminates in a new town or village, where our only major task is seeking out a suitable watering hole for the obligatory happy hour, followed by a place to enjoy a well merited dinner.

Our cycling trip conclude in the historical city of Vienna, and after shedding the bikes and checking into ‘Pension Vitis’, it’s time to explore. Our first stop is the funky Hundertwasser Haus buildings. Created with total randomness, drunken angles, and all of the vibrantly painted apartments a complete mismatch; the nonsensical scene implies it was designed by Dr. Suess! We move on to the famous Naschmarkt market and then stroll through the grounds of the ostentatious 1,441 room Schonbrunn Palace.

After a few days in Vienna we’re eager to experience a new country, and cross over the border to the sunny side of the Alps and the Republic of Slovenia; a former province of Yugoslavia. Our first stop is at Lake Bled, where impossibly romantic and fairytale scenery has us enthusing at every turn.

Random reverberating bongs reverberate from a massive wishing bell in a quaint 15th century church sitting on a diminutive island in the middle of the glacial lake. Nearby, a 1000 year old medieval castle perches dramatically on a precipice 130 meters above the lake, with the Julian Alps scraping the sky beyond. The charm simply oozes from the pint-sized town with the look of an air-brushed cover of some fantasy novel.

Cycling through the villages of Podhom and Zasip, we lock up the bikes at the enticing Vintgar Gorge and hike the wooden boardwalks suspended out from sheer rock walls constraining the flow of the crystal clear Radovna River. Returning to Bled, we further our workout by scrambling like a couple of mountain goats up to the brow of Velika Osojnica via a steep tree-rooted path; aided by longest vertical ladder we’ve ever seen.

Another of our highpoints in Slovenia is a nine hour day trip into Triglav National Park, with a lovely guide named Tina Hiti. Beginning in picturesque rolling green valleys adorned with sheep, we end up traversing a dangerous mix of switchbacks, tunnels, and hairpin turns on a narrow gravel military road which is the highest road in all of Slovenia, terminating near the top of Mount Mangart.

While indulging in the eagle eye vistas over Slovenia and Italy, Tina whips out a flask of her homemade pine schnapps to toast the beauty of the Julian Alps. Christine and I now understand why the majesty of these dramatic mountains turns so many folks into Alp-oholics.

Down out of the muscular mountains, it’s time for lunch and Tina takes us to a cafe and promptly orders a plate of bread and smoked lard! Now I know this girl has a sense of humor, but smoked lard?  Better than peanut butter she claims; stuffing a glob into her gob and talking around it.

I start ribbing her about this cookie-tossing appy and am getting good mileage out of it until Christine comes to her rescue, dredging up my less than divine goat penis wine episode in Vietnam. Tina surprises us yet again by ordering us ice cream covered in pumpkin seed oil.

Along with her slippery food choices, she entertains us with an astute knowledge of her beautiful country, and shares a couple of humorous expressions used by older Slovenians when they want to politely swear. Translated; one means ‘300 hairy bears’ and the other converts to ‘May a chicken kick you in the bum’! Oh, how wonderfully useful; I just can’t wait to work these pearls of wisdom into a conversation!

With our ‘guffaw-full’ lunch finished, we have time for one last hike in the beautiful Soca Valley. After our return to Bled we flop out on our balcony below window boxes spilling over with cheerful red geraniums; pouring a hefty splash of Merlot and raising a glass to another delightful Slovenian day!

Before leaving town, we circumnavigate Lake Bled on foot to see its beauty from every possible angle. Along the way we are amused by boats imbedded into rowboat shape cutouts on a wooden jetty; giving the dock the appearance it was chomped by the jaws of some mutated megalodon shark the size of a freighter!

Well, it’s now past our Bled time, so we forge on to Ljubliana. What’s a Ljubliana you ask? Why, it’s the pint-sized capital of Slovenia of course. The charming old city is full of artists, museums, and galleries; but regrettably, we arrive on a blustery day with Noah-like rain that sounds a lot like gravel sliding off a shovel.

Christine buys an umbrella, only to have the vicious wind turn it inside-out upon opening; and with the black fabric now draped over her shoulders, she bears a striking resemblance to a tangled bat! The cloud’s angry hosing promptly drenches us through to the skin, and looking like a pair of sodden rats, we splashily race back to the bus station to unpack some dry clothes for our Slovenian departure.

Though clearly not as adventurous as many of our ‘back of beyond’ trips over the last three decades, we have thoroughly enjoyed our cycling spree, and can’t wait to re-cycle a few more European countries!