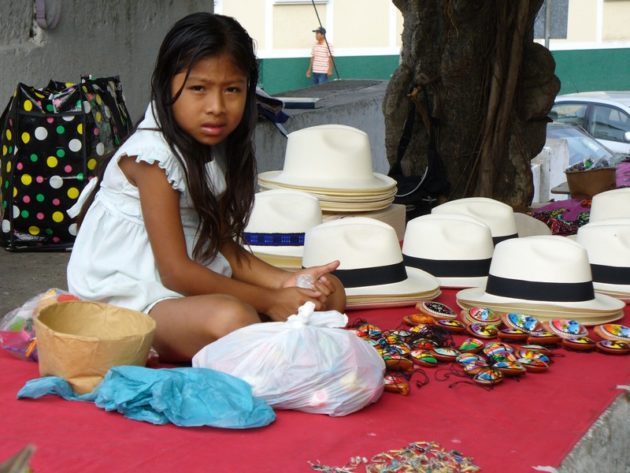 With Central America again beckoning, this winters respite is going to be a flash in the Pan-ama. Images most often coming to mind are of a pineapple faced Noriega, drug running, and of course, the world’s greatest shortcut, the Panama Canal. However, we are keen to discover what else the country has to offer.

We start the ball rolling with a flight from Panama City out to Contadora; one of the Pearl Islands where 16th century Spanish Conquistadors came in search of the coveted pearls. Flummoxed at the airport when a security guard confiscates Christine’s eyelash curlers, I argue they are not a problem. However, it’s like trying to explain the Theory of Relativity to an ostrich, because when they were passing out stupidity genes, this crackpot hit the jackpot! A ludicrous image pops into my head of some daft dolt brandishing the curlers on the plane yelling, ‘Take me to Columbia, or I curl your eyelashes’!

The regional Aeroperlas plane is a pint-size puddle jumper, and lands on a rugged runway, laboring to a halt concerningly close to the sea. Our is one of the last flights to use this broken, too-short runway, as its condition is so bad aircraft tires are only inflated to half pressure to stop them from blowing out on landing.

Contadora is just over a square kilometer in size, and at best can be described as rustic. Neon and traffic are unknown entities, and any transport requires the use of a golf cart or our feet. The island has hosted three seasons of TV’s SURVIVOR shows, and the Frigata Magnifico room we are renting is where the show’s host Jeff Probst also stayed during filming which is kind of cool since we are longtime fans of the show.

With a hankering to try some fishing we hire the local expert Pedro, to see if he can work his magic. After a couple of hours we’ve enjoyed a pleasant, but fish-free boat ride. Fortunately, I’ve brought along mask and fins in hopes of a close encounter of the marine kind. I jump overboard off Isla Chapera to snorkel in a sea oozing with tails and scales. The name Panama translates to ‘place of abundant fish’, and I now understand why. Given the stunning variety on display, I can understand why people morph into aquaholics.

With the meter still running, we head back to Contadora, but Pedro’s ‘fishful thinking’ is that we keep the rods out on our way back. With what I’ve just seen, we agree. Sure enough, ten minutes later off Isla Mogo Mogo, my rod is thrashing about with a large angry mackerel on the line. Clearly it’s hard to persuade the fish to give up its salty life for a hot frying pan, but finally I reel it in close enough to use the gaff, and victory is mine. Holy Mackerel; we better find some tartar sauce, because my slippery new friend’s name is dinner!

Hiking to the vandalized ruins of Contadora Resort on Playa Larga, it’s pretty clear Panama has a failing grade in environmental awareness and recycling. The secluded beach is a trash-strewn sea of plastic and debris. I scramble up onto the top of the rusting corpse of a long abandoned Soviet-built ferry rusting away on the beach; standing with arms splayed in a starring role of my own mini version of Titanic.

We have come to this beach is so I can snorkel its coral reefs. Christine is not exactly a daughter of the water; paranoid of everything in the sea, to the point she’s even worried about being ravaged by hostile plankton! She chooses to sit on shore, and so giving her a wave, I plunge into the limpid sea rife with life.

Things are going swimmingly until pausing at a huge cloud of purple and yellow fish. Suddenly, in a flurry of fins, they scatter like wind-blown confetti and reveal a ferocious looking eel. It has obviously been chomping on a meal with the leftover scraps attracting the minions; but now, the toothy snake-like creature begins undulating towards me! With both adrenaline and flippers pumping, I vigorously head for shore, chagrinned to see a ‘told-you-so’ smirk on the face of you know who! I’m thinking of new lyrics to an old Dean Martin song; ‘When you snorkel the reef … and an eel gives you grief … that’s a-moray’!

Isla Contadora has four resident policemen, who all show up at the house today! Have we done something wrong? Naah, it turns out they don’t have enough to keep them busy and have temporarily swapped their weapons for sandpaper, having been hired to resurface the sundecks. We’ve enjoyed the calm of island, but our four Contadora days have disappeared as quickly as cookies at a pot party, and it’s time to move on.

Back in Panama City, we quickly realize this is not a city for the timid, as there seems to be almost as many police in town as fish in the sea. Dressed in bullet proof vests and armed like they’re going into battle, cops here travel in packs for safety. They stop us to warn us about avoiding bad-assed barrios such as El Chorillo, which may prove detrimental to our health, as in that area gun control only means using both hands!

Choked city traffic teems with Diablos Rojos; the red devil buses. These ancient 12-ton diesel chariots chug through the city taking ‘pimp’ to a whole new level with brightly airbrushed snouts and butts adorned with images of Christ, Al Pacino, cartoon characters, Osama Bin Laden, Clint Eastwood, etc.. Some even have shiny streamers hanging off steering wheels and outside mirrors; much like those on a kiddie’s bike.

To escape the city’s disagreeableness we taxi to Amador Causeway; a 3 ½ mile breakwater built from part of the 268 million tons of ground excavated during construction of Panama’s great cross-country ditch. Back in town we meander about the historic Casco Viejo area admiring many wonderful buildings splashed with a floral vibrancy cascading over balconies sculpted with iron railings crafted in the previous century.

Flying north to the town of David, we collect a rental car and accidentally drive over a large iguana that scampers out in front of us in the Chiquiri Highlands. Leaving the squashed reptilian speed bump behind, we continue on to the flower filled town of Boquete, where devastation from severe flooding two weeks ago is still obvious, having made a mess of the roads, buildings, and bridges.

Boquete Garden Inn on Rio Pianista cowers at the foot of the extinct volcano Volcan Baru, Panama’s highest mountain, and its colourful gardens attract a menagerie of exotic birds; including honeycreepers, tanagers, and wonderful iridescent little hummingbirds that sparkle in the sun like flying jewelry.

Unfortunately, several of the hiking routes we hoped to experience are inaccessible due to recently washed out roads and trails. Asking around, we learn of a scrawny mountain path used by the indigenous Indians, and we decide that it will be our mission for tomorrow, which happens to be Christmas Day.

Our trek begins with the udderly unusual sight of grazing cattle dotting the summit of the steep green mountainside. I’m not sure what their moo-tivation was, but the climb must surely have been quite the workout for the hefty four-legged trekkers! Shimmering neon blue Morpho butterflies dazzle us with their aerial dancing along the muddy path leading to a family of ethnic Ngobe-Bugle Indians and their scruffy kids, chickens, and puppies. Our chilly turnaround point is cloaked in a misty rain and a gathering of swirling clouds the area is famous for.

Back at our hotel after a five hour workout in the shark-grey gloom, it’s time for a hot shower and a splash of rum! Christmas dinner is a lovely candlelit affair in the fireside lounge of the 1914 built Paramonte Inn; the first lodging ever built in town. Surrounded by a white picket fence, the old inn has a storybook charm.

The sky is clogged with clouds promising rain during a country drive to the mountain villages of Cerro Punta and Volcan. However, not letting the weather steal our shine, we stop the car and hike in to Caldera Hot Springs, where we quickly loose our clothes and enjoy a bottle of wine while wallowing in an outdoor bath where the water never turns cold.

Driving back to the town of David for a flight back to Panama City, ‘iguana karma’ strikes, as it’s now our car tire that is flattened rather than another reptile! Alarmed about missing the plane, we work with pit-crew speed and manage to swap out the tire and reach the airport with mere minutes to spare.

On the flight back we contemplate where and how to fill the last of our Panamanian holiday; as I’d rather pour honey over my genitals and lie on bed of ants, than spend any more time in the city! Alternatively, we hatch a plan to bus over the distinctive Bridge of Americas, spanning Panama’s ‘great gash’, to the mountain town of El Valle. Located on the floor of the largest inhabited extinct volcano in the world, it makes a great port of call, and offers the opportunity of some healthy elevated hiking.

Our last day in the country is spent 12 miles off the coast on the island of Taboga, and after hiking to the top of ‘Cerro de las Tres Cruces’ Trail for the panoramic views, we’re content to simply hang out on the beach and be nourished by the sun until the sunset paints the sky a bubblegum pink, indicating it’s time to boat back to the mainland; concluding our pleasing sojourn in the Banana Republic of Panama.