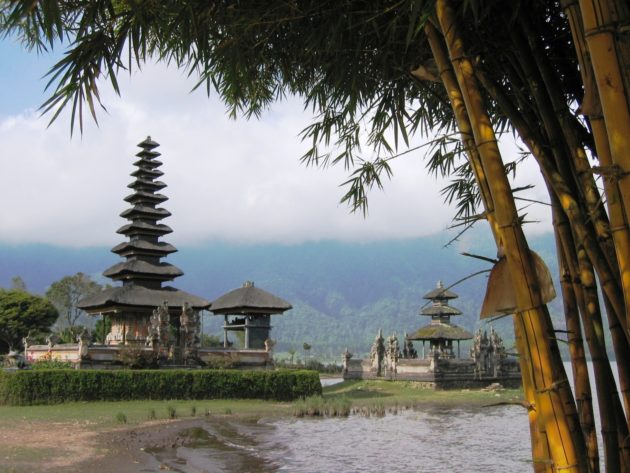 This winter we’re removing the robotic regularity of routine by rewarding ourselves with a little romantic recreation in a region offering a warmer postal code. Our plan is another Asian invasion, to tread some turf in the balmy tropical nirvana of Bali, where tomorrow’s sun is already shining.

During a brief stopover in Singapore, we’re surprised to find it experiencing health concerns, due to the invasive smoke being generated from fires burning out of control on the Indonesia islands of Sumatra and Kalimantan. It looks like an attempt of a mass fumigation of the city.

Christine’s sister Brenda has arrived today, and the siblings instantly are keen to prove their purchasing prowess. Obviously it’s a chromosomal disorder, but I try and convince Chris and ‘Sis’ that we are in Singapore, not ‘Spending-more’. My plea, however, is like trying to teach a pig to sing; it wastes your time, and annoys the pig; so I opt for a bike ride alongside the Singapore River. Tomorrow we are back in Bali.

In Denpasar, Christine and I line up in the sluggish Immigration queue, eventually confronted by an officious maggot on the make. After a quick glance over his shameless shoulders, the morally bankrupt jerk with an insolent sneer tugging at his lips, mumbles ‘So, you from Canada; you have some money for me?’

With a counterfeit smile reply; ‘Sorry no cash – only travel check’. Locking eyes and icily throwing silence at each other, the larcenous scammer, scowling as if he just stepped in canine fecal matter, finally tosses my passport back at me and we are in. Welcome aboard the good ship Ass-Kisser, nice day for a sail!

Outside the airport luscious warm air embraces us like a long lost friend while we arrange transport to the village of Ubud. On arrival, the unscrupulous driver claims he works for the bungalows, and wants payment for the room before we even have a chance to see it. I’m wondering if his ass is jealous of all the shit coming out of his mouth! After receiving my drastic word-wounding, the vile smile slides off the sleazebag’s face and he makes a cashless exit! As wily veterans of Bali we are well aware of this common scam.

Heading out for a romantic candlelit dinner at Murni’s Warung; a café sculpted into fern-covered rocks high above the Ayung River. Enjoying getting intimate with a varied sampling of beer, I inform Christine that if the barman isn’t kept busy he may be laid off, and I just couldn’t have that on my conscience. Therefore, fulfilling my moral obligation, I am swilling and sacrificing myself for the greater good.

All is bloody marvelous until the bill arrives and I notice the waitress trying to rip us off for fifty thousand rupiah, probably presuming I’ve gone too goofy on grog to notice the error. Obviously these lightweights are unaware they are not dealing with a rookie slurpitator here! ‘Oh sorry boss, we make mistake’, says one with an apology dressed in insincerity. Yeh right sister; and I am Humpty Dumpty! Having now avoided three seedy shakedowns on our very first day, we trudge on back to our bungalow to call it a night!

We have a prearranged cycling trip through the countryside, and our guide Wayan drops by with his little daughter Devi and an American couple who will be joining us. Before we start cycling we stop in the mountains at Kintamani to enjoy a breakfast overlooking Mt. Batur’s active volcano.

Collecting our bikes off the trailer we notice the four bikes for the four guests, but Wayan’s bike with the kiddie’s bike seat is too big for him, meaning his lovely five year old daughter Devi won’t be able to come along. Heartbroken, the thwarted toddler begins sobbing because she wants to go riding with her dad.

As a solution, I offer to give up my bike to Wayan and take the bigger one with the kid seat on the back. All is agreed to, and I’m now the hero of the hour. Unaccustomed to my new chauffeur status and its extra responsibilities, I cautiously pedal away adjusting to my new ‘backseat bundle’.

The little cutie is a real sparkplug, and after some mischievous games in the van, has apparently decided to be my tormentress for the day. In girly glee from the back of the bike, the pixyish imp babbles at me in unrecognizable Indonesian, and pokes me in the butt when she wants to go faster. Her giggles soar up into the tree canopies and the rest of the crew all seem to be enjoying her devious antics!

Christine and I have brought along some little stuffed animals from home to randomly distribute along the way. Little kids just love the gifts, and giving them away brings an equal amount of joy to us. So she doesn’t feel left out, we also give little Devi a small stuffed owl that she just adores, and when we stop for a snack, the first thing she does is try and feed it a banana; making an already fun day even better!

Cycling through Bali’s divine rice fields, I stop to take a photo of a gaunt greying farmer lumbering past carrying a huge bundle of elephant grass. Using Wayan as an interpreter, the elderly fellow inquires where we are from. Thoughtfully stroking his chin when told, his Indonesian reply is translated back to us:  ‘Canada, US, Bali; we all same, all brothers’.  A lovely thought from this toothless but cheery country gent.

After the ride we drive to Wayans home where his wife Ketut, who teaches cooking classes, has prepared a scrumptious ten course Balinese feast. Sitting bum-to-floor and feeding as greedily as tics, we finish off every last morsel, blissfully replenishing our caloric expenditure during the cycling.

As part of her daily therapy Ms. Shopalot is again going out to enjoy a thrill at the till, so I decide to lotion up and head poolside to get my brown on. While attempting a little yoga, I look up and see a little four or five year old brown girl standing there with a big blow-up purple duck water floater around her waist.

‘What do?’ the toddler utters, looking up at me.  Stretch, I reply. I’m not sure what the little explosion of cuteness thinks that means, but with a startled look she wobbles away looking for mum as fast as her pudgy legs will go, surrounded by the purple duck frantically bouncing along around her. I can’t help but chuckle at the comical encounter with the tiny tyke!

Out for a day of exploring we stop at the Bali Bird Park in Singapadu where the rainforest-like gardens host over a thousand exotic birds with a repertoire of catchy trills that explode out of the tropical lushness. Leaving thee garrulous gang of feathers, we reach the temple island of Tanah Lot and somehow end up wearing a couple of massive live pythons as neckties. Next stop is the iconic and beyond impressive 1633 built Pura Ulun Danu Temple, snuggled on the shores of Lake Bratan.

We continue north through Singaraja and on to Lovina, for a swim with a dolphin. On arrival we meet an orangutan living on the premises, and the former jungle swinger holds out a long hairy hand through the cage bars like he wants to shake; but it’s a ruse. His dexterous digits close on mine like a vice as the sneaky incarcerated ape pulls me towards him; resulting in a quite a tug-of-war before I can break free. OK, enough of my ‘fast and furriest’ encounter with the rambunctious fuzzy-faced ape; I’m here to swim with the fishes!

In the pool I’m instantly met by a dolphin named ‘Jon’, and stroke his slippery smooth skin. Shockingly, the over amorous young Jon seems only interested in doing the ‘Wild Thang’. Looking for love in all the wrong places, ‘Randy Jon’ repeatedly rubs his sizeable aroused appendage against my leg, causing me considerable angst. Now don’t get me wrong, I’m hugely fond of Flipper and all, but having this lewd and crude dude trying to impregnate my leg in a watery porn flick is a whole other matter! Holy Hell; first I’m yanked, and then nearly wanked! OK, enough naughty nature for today, I’m definitely over this frisky fin and fur fiasco!

For the next ten days we’re staying in Sanur at the beachside Sativa Hotel. Sunshine spills across a lovely pool surrounded by palm trees and magenta bougainvillea, and when privacy permits, we engage in a slow dance in the shallow end. Sipping rum and mango cocktails on our balcony, we watch cute suction-footed geckos scampering about, and listen to the squirrel chat emanating from fragrant frangipani trees.

Early mornings we usually walk or run along a new seawall that stretches for miles along the aquamarine Timor Sea. Happily, my aching hip is feeling much better, and I’m crediting the improvement to the serious liquid engineering of Bali’s beauteous Bintang beer! The only negative is in the tropical sun, the beer warms up sooner and requires faster guzzling; but not to worry, I am rising to the occasion!

For travelling longer distances we are using primordial metal mounds known as ’bemos’ that are more often than not held together with wire and rope. Highway driving is brutal, as the vehicular lunacy is like some kind of machismo Asian stock car racing, where passengers constantly on the brink of catastrophe are acquainted with symptoms of feverish prayer, piercing screams, loose bowels, and cardiac arrest from the tangle of traffic flashing past mere inches away!

An adventurous Bali Hash Harriers run is taking place about an hour’s drive outside of town, at Pasar Pongung. To get there, the runners have rented the ‘Magic Bus’, and playing silly bugger, we pop a few beers for some last minute carbo loading. Then, like a bunch of ridiculous retards, the raw, rabid, rough and ready, raucous and raunchy, rebel rogues who revel in causing a ruckus, rapidly race off into the boonies!

As usual, the route is a challenging run through forests and rivers, often requiring desperately clinging to roots and vines the size of our wrists to hoist ourselves up steep slippery gorges. After the run, the bar opens, the circle closes, and the usual Hell breaks loose; with gallons of carbohydrates migrating from kegs to stomachs. The camaraderie is terrific, and we have come to love these unusual adventure runs, because for “Hashers”, the only thing ‘normal’ is a setting on a washing machine!

The final stop of our trip is a foray into the conundrum of Kuta; a less than stellar example of beautiful Bali. The only redeeming quality of the town, other than its shopping, is miles of sandy beach where we stroll hand in hand where sea kisses sand. Experience reminds me that holding hands with Christine is an absolute must, because if I dare let her go, she’ll go shopping and start caressing price tags. Though it may look romantic, it’s more an economic measure to try and help minimize purchases by the Queen of Shop.

Shiver Me Timbers, I’m happy to embrace my inner shallow at the beach, as I can’t help butt appreciate the delicious sights, because like most males, the ‘bottom line’ is I have an inordinate affection for these flimsy ‘brassieres for the rears’!

After a last few days scattering around any spare cash, Team Canada’s rather tame Balinese escapades for this year have come to an end! Upon returning to Canuckistan, I turn on the TV, and what should appear? Why, it’s none other than Don Cherry and Hockey Night in Canada. O Canada; good to be back home, eh?