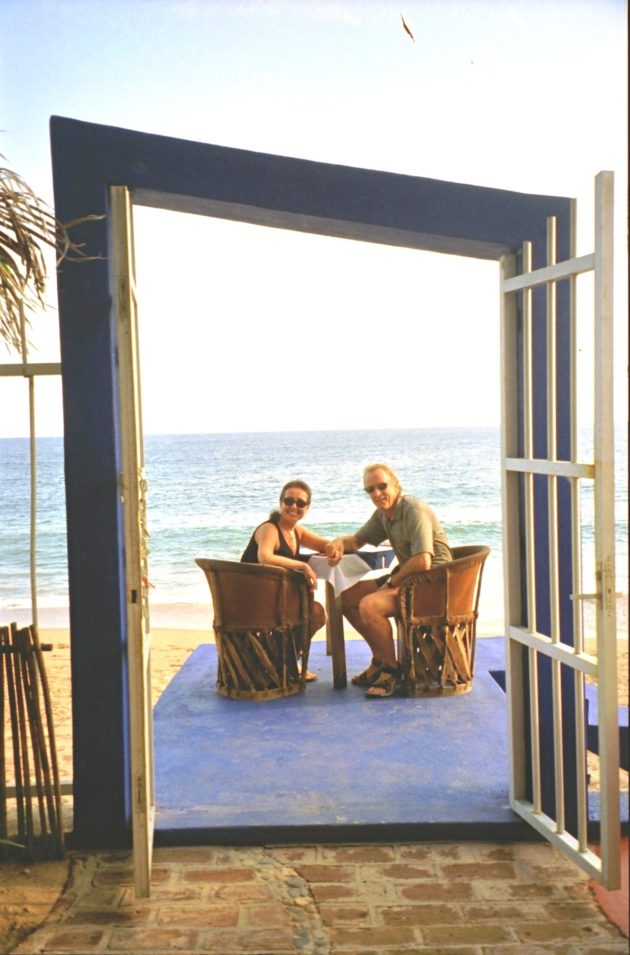 For a special anniversary Christine and I are swapping business suits for bathing suits, in the seaside paradise of Melaque. Inside Manzanillo’s airport we’re greeted by a peculiar crustacean invasion, as dozens of little crabs with either a wonky GPS or trying to stowaway as illegal immigrants, scuttle sideways across the tile floors between the sea of human legs. Avoiding the crab, we grab a cab, and head into town.

It’s now the off season in Melaque and a tad early for the Metamucil migration flocking here for the winter months. Owners of ‘La Paloma’ inform us we’re the only guests, and we’re elated to learn we’ve been upgraded to a spacious self-contained penthouse. It is one sweet suite, with sea view decks, a palapa, exercise bike, hammock, BBQ, and a splendid swimming pool adjoining the beach and its tumbling surf.

Most restaurants in town are closed, but fortunately Restaurante Maya is remains open; offering wonderful food, gentle jazz music, and a unique dining deck built out over the beach. As waves turn the fine sand into a frenzy of froth just meters away, we perform our magic act of making several margaritas and Pina Coladas completely disappear! A montage of Mexican life unfolds before us as we sink our teeth into the tasty flesh of our almond covered shark dinner.

Saturday night after dinner we head to the Jardin, the town’s central square, where teenage boy Romeos are congregating in anticipation of meeting nubile, short-skirted morritas who’ve come to strut their butt; with what appears to be chaperoning grandmothers lurking not far behind the behinds.

Walking the beach’s tideline to the next town of Barra de Navidad, we stop at Velaros for a seafood lunch and are joined by a pod of pelicans. A most comical looking group of feathers with oversized webbed feet and eyes too close together, they are standing on the dock of the bay (sorry Otis) with their preposterously prodigious pouches and bountiful bills pressed to breasts, resembling gigantic feathered bobby-pins.

Checking out Grand Bay Hotel for our upcoming anniversary dinner, we find the massiveness of the place totally devoid of ambiance. Later, on the Barra docks we happen to be chatting to a boat owner named Victor, and together, we hatch a brilliant alternative plan for our special upcoming celebration.

Today however, we hitch a two hour ride into the town of Colima in the Sierra Madre foothills, with a fellow Canuck named Ray, who is taking his truck in for repair. After agreeing to reconvene later for a lift back, Christine and I wander off to explore and soon encounter a couple of humorous incidents of culture clash.

Our first stop is at a department store to check for an ATM. I ask if anybody speaks English, and staff call over a girl who can speak a ‘leetle beet’. I ask her if they have an ATM machine, to which she replies ‘Si Senor, please comb’. She winds us through the store past the ladies underwear and into the sporting goods section where she proudly points to a large exercise machine and says; ‘Ear eeze dee ATM mahine’.

With four raised eyebrows, we inform her that we’re in need of money not muscles, and I pull out my bank card to show her. She gasps at her gaffe and begins profusely apologizing. Unsurprisingly, when cultures collide mirth frequently follows, and as we begin to chuckle, she too joins in the merriment. We follow her back to the front door, where she points down the street to a Cambio money exchange and says, ‘Than chew Meester; for dee rest of my live, I wheel no forhet chew an dee ATM mahine.’

Fat walleted with pesos, and having avoided pumping iron, we continue to saunter. Surprise, surprise, Christine finds some sandals she wants to buy. The price is 220 pesos, but being used to haggling in Asia, I decide to negotiate. My Spanish bargain-jargon creates a less than sparkling repartee, so I devise a new strategy and resort to pantomiming my point to the Bambi-eyed salesgirl.

Using my finger, I draw out on the shop wall a two, followed by two zeros; indicating 200 pesos. Without missing a beat, the caramel skinned beauty, batting flirt-worthy eyelashes accentuating every blink, grabs ahold of my index finger. Holding onto it with both hands, she slowly ‘redraws’ over my 2 0 0 with 2 2 0! I open my mouth but words fail to materialize, leaving me uncharacteristically speechless!

Her radiating a smile is so bright I’m concerned gazing at it too long may increase my risk of melanoma, and realizing I’m done like dinner, I burst out laughing and pay her the full price. Clearly, I’ve come out second best, but this is undeniably one of my more pleasurable retail experiences; plus we have made a new friend in Colima.

‘She-Who-Shops’ buys a few girlie things while I procure a large bag of sea salt, before hooking up with Ray for transport back. On the way, he stops outside the town of Comala to show us the ‘Magic Zone’; a startling illusion where the road appears to go uphill, but in fact goes down. I accuse him of having too much tequila, but in a Ripley’s moment, he puts the truck in neutral and sure enough the truck continues to go ‘up’!

Ray then stops at a cafe where he says all the food you can eat is free when you order drinks! Sure enough, after ordering two brewskis for us and a margarita for the senorita, eight plates of edibles are paraded to the table and a Maharachi band saunters by to serenade us with a song. Ah yes, the great eight plate pit stop!

Blasting along the highway on the way back, a car up the road clips a motorcycle, causing an accident. Ray doesn’t see the crash, so I shout at him to stop so we don’t crash into the car in front of us. Metal and bodies are somersaulting, and a helmet bounces past us about 80’ feet from the crash, but fortunately for the rider, his cranium is not in it! As a crowd gathers to sort out fault, Ray decides there is enough help, and suggests we vamoose rather than get involved with the Federales.

At the beach today, I dive into the sea just as a monster wave decides to take its wrath out on the shore. Snapping my body backwards, it flings me up on the beach like a rag doll, leaving sand imbedded in every possible orifice along with a full on body exfoliation! An hour later I’m hobbling about our suite when the owner comes by with a warning to avoid the water, as a hurricane less than 40 miles off shore is causing havoc. Wincing a smile, I think to myself that her timing has significant room for improvement!

Today is July 14th, and our 20th wedding anniversary, and breakfasting outside on our balcony, we are treated to an extraordinary occurrence. Beneath an inviting daffodil sun the empty sky suddenly thickens with the radiant migration of hundreds of Monarch butterflies all fluttering past in the same direction.

The winged exodus lasts for over an hour, leaving us plenty of time to contemplate the stunning flutter of butterflies deciding to introduce themselves on this very special day! As our celebratory day slides by, we marinate in the sun at the pool atop air mattresses; slothfully floating about on our backs like a pair of otters, with a good read in one paw and a chilled beverage in the other.

As the sun begins to slip we taxi to Barra to rendezvous with Captain Victor. Climbing aboard his panga boat, we tour around the lagoon with glass in hand, before mooring on Colima Island. The island’s seaside restaurants are all closed for the off-season, but several days ago we made arrangements with Victor, who lives on the island, to have one of the restaurants open up just for us.

Victor has ensured the place has taken care of our seafood request of Dorado and jumbo prawns, along with soft music and a candlelit table in the sand just a few feet from shore. With the sea gently lapping up beside us, we delight in a few transfusions of joyful spirits brought from home for the occasion. This brilliant salty setting provides a marvelous mellow to complement our private and romantic anniversary dinner.

I present a present to Christine; an engraved medal I’ve had made up for being married to me for 20 years. She is blown away, and I think I may have just scored some lifetime brownie points. Slow dancing in the sand under a sky chockablock with stars, all is well with the world. In the early hours of morning, Captain Vic boats us back to Barra, bringing to an end our magical day and important anniversary. Es Muy Perfecto!

For our last night we’re at Restaurante Maya, on ‘our’ special seating area out over the sand. A caballero gallops past atop a white stallion kicking up a rooster tail of sand, with frigate birds ride the thermals overhead. Patrolling the waves like jet fighters in formation, keen-eyed pelicans sporadically tuck in their wings for an ungainly kamikaze style splat into the sea to scoop up an evening meal in their bills.

As our dinner arrives, so too does a little pooch, unglamorously name is ‘Itchy’. He does his little happy dance, and if a dog’s life is measured in wags he seems to be doing just fine. Kindly helping us to finish off dinner, he continues to sit by patiently; gazing up at us with soft brown eyes and likely envisioning dessert.

With a clink of glass we raise a toast to 7305 days of wedded bliss, while savouring the serenity of the setting sun pinkening the sky over the surrounding majestic hills. And now, with our ‘Mexcellent’ meal over, so too is the brevity of our time in Margaritaville.  Aah the magic of Melaque.