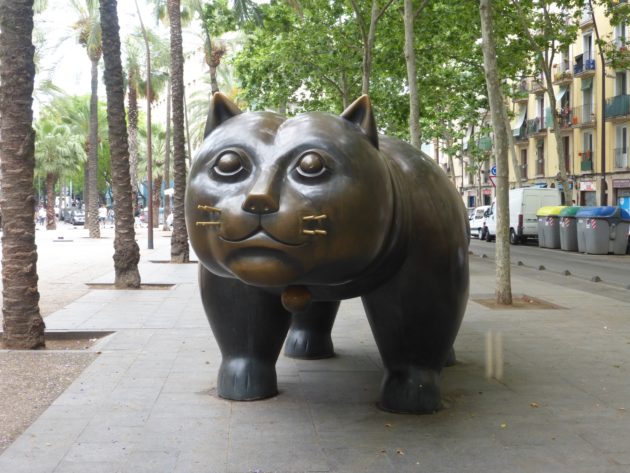 “Please make sure your tray table is in its upright locked position”. The familiar request signals it’s time for our plane to transition from runway to sky; as the purring engines begin swallowing the miles separating us from Barcelona Spain, the proud capital of Catalonia.

Taxiing into Barcelona, we pass by what appears to be apartments snuggled into the slopes of Montjuic Hill. However, a closer inspection reveals the only ones calling this home have long since departed, as it is the 57 acre Montjuïc Cemetery; said to contain the cremations and burials of over one million people!

Fortunately, being inside the city it radiates a much livelier atmosphere, with spunky Spaniards sitting and socializing on the Jacaranda-lined ramblas; fantasizing over the future or chewing on the past while sipping coffee from tiny cups looking better sized for a hamster.

Roaming about and letting the city introduce itself to us, an intermittent ‘eau-de-sewer’ wafts up from the ancient sewer system, keeping our offended nose on its toes. It does strikes us as odd that in a city hosting such amazing architecture they have yet to master the science of sewage!

We pass by numerous free-flowing works by Gaudi; including the ‘Cascada de Gaudi’ fountain, Casa Batllo, and Parc Gruel Gaudi. The long gone architect was unquestionably the oddball superstar of his day, and responsible for spawning the English term ‘gaudy’. His unique creations all seem to be infused with a flamboyant flair; featuring an unaccountable taste for the wacky, wavy, weird, and whimsical.

The most famous of his designs and the crown jewel in Barcelona’s architectural landscape is the Sagrada Familia. In all its Gothic glory, the ‘Gaudi-gone-gaudy’ church is a colossal conglomeration of complexly carved concrete covering the crane-crowned church currently under construction since 1882. Amazingly, it has already taken ten times longer than it took to build the great pyramids of Egypt!

It also seems strange that a city with so much peculiar architecture rejected Gustave Eiffel’s offer in 1888 to have his now famous tower built here. Apparently it was fearful the large tower would be an eyesore on the skyline and upset residents; Barcelona’s massive loss turning into a marvelous gain for Paris!

In front of the architecturally beautiful Cathedral of Barcelona, traditional Catalan Sardana dancing is underway, with a selection of stunningly sensuous senoritas sassily sashaying about, displaying some splendid and shapely architecture of their own!

The intriguing city fools our sense of direction at nearly every turn, and we spend the day getting lost, getting unlost, and getting lost again. Hoofed legs of ham dangle from shop ceilings along a timeworn alleyway that unexpectedly leads us into the neighbourhood of Raval. What first grabs our attention is the eye-catching statue of a bronzed pussy of preposterous proportions known as the Botero Cat! The over-nourished monster mouser is over 12 feet long, 5 feet tall, and tips the scales at a whopping 1.2 tons!

From lively Placa Catalunya Square we roam the leafy La Rambla; a giant pedestrian boulevard known for its towering shady trees, living statues, and other eccentrics looking to loosen tourist Euros. Manteros (Blanket Men), mostly of African descent, illegally clutter the wide sidewalks with chintzy counterfeit merchandise from Asia spread out on blankets. A web of rope is tied to each corner so when police approach the scammers can quickly gather up their blanket of goods in a big sling and make a run for it.

Tucked away down a tangle of lumpy alleyways nearby is an offbeat Hobbit-like bar called ‘El Bosc de les Fades’ (Fairy Forest). It’s almost as hard to find as a real fairy forest and the bar’s innards reveal a bizarre, dimly lit artificial forest inhabited by mythical fairies, eerie mannequins, and a haunted room with optical illusions of a floating corpse and demons lurking in the mirrors. Indeed one intriguing Bar-celona oddity!

Montjuic Magic Fountain delights millions of folks each year and many leave their hearts.  I do one better; I leave my sole. While climbing the stairs I suddenly trip over the rubber bottom of my sandal, which has bid farewell to the rest of the floppy footwear. In addition to the sole, I too have become unglued, as a result of my newly acquired limb discrepancy, forcing me to endure a silly looking and sounding, thump-thwap, thump-thwap hobble-fest all the way home.

Personally, I find Barcelona a bit of a snooze-fest, and after ten days am elated to hop the border into Portugal. Bussing to Rossio Square in Lisbon, we haul our luggage up hilly centuries-old cobblestone streets, then up a staircase with another 200 stairs to our B & B, and finally up three more flights of skinny interior stairs steep enough to stress out a mountain goat.

After starring in our own version of ‘Stair Wars’, we’re dismayed by seeing the spacial sadness of a room that even a diminutive gerbil would find claustrophobic. Lisbon is older than Rome, and was the epicenter of the largest earthquake in history in 1755. Our catastrophic room feels about the same vintage and just a shiver away from total collapse! Crafty owners required payment in advance, so sadly the room has to suffice as home, unsweet home, for the next three days.

In the village of Sintra we visit Palace of Quinta da Regaleira; wandering about its gardens and down into the spooky Initatic well via a dark spiral stone staircase sinking 27 meters into earth; then as pleasing contrast, climb the Santa Maria Trail to the Palace of Pena and the Moorish Castle.

After a calorie purge on the hills I hear the liquid voice of a cold beer calling. I obey the summons and Christine orders a tasty Portuguese cherry liqueur called Ginjinha before we return to Lisbon’s El Rie de Franco Bistro Café, for a glass of green wine and an octopus salad pummeled to perfection.

By chance, we wander into Lisbon’s long gone Red Light District; now turned pink! Several years ago Rua Nova do Carvalho, a once notorious gambling and hooker hangout where sailors went for a night of delight, underwent a rejuvenation creating trendy bars and eateries. At the same time, some poof Einstein decided to paint the street a provocative pink. Adding to the tackiness of the renamed ‘Pink Street’ is a life-size pink plastic oinker tethered upside down to the exterior of one of the former brothel’s walls!

In Alfama District’s rabbit warren of alleyways, we climb the precipitous staircases for the view, before wandering into the impoverished Mouraria area, which is home to some fifty-six nationalities of foreigners; mainly from Bangladesh, China, India, Pakistan and Mozambique.

From the impressive Tower and Monument of Discoveries in the Belem district we train out to Cascais and rent bikes. Our first cycling stop is at a beach statue of a giant red right hand, reminding me of the ‘Peaky Blinders’ theme song by Nick Cave and the Bad Seeds. We carry on to Boca de Inferno (Hell’s Mouth) and right to the path’s end at the boardwalks and sand dunes of Guincho Beach.

Today, after a long hot delay on the Lisbon runway, our plane finally receives clearance for a short flight across the border into the uphill-downhill city of Porto. We have the next six nights booked at Porta Azul B & B; an amazing 200 year old home with walls of granite 18″ thick.

Our hosts Marta and Pedro provide sumptuous breakfasts and a different baked cake each day, and Marta informs us that tomorrow she is going to make us “goose paste”! My initial deer-in-the-headlights expression morphs into a full-on smirk after realizing what she means; thinking how horrified the French would be with this interesting reference to their beloved Foie Gras!

The tortuously hilled town of Porto is chockablock with charm and ancient granite buildings still standing proud. The majestic São Bento train station is like a tile museum, adorned with over 20,000 decorative ceramic tiles depicting Portugal’s past, including everything from weddings to wars. Port cellars abound over the Ponte Luis Bridge in Gaia, and the Douro River is decorated with a flotilla of square-sailed old sailing boats called ‘Rabelos’, once used to transport port downriver to Porto.

Our dinner is definitely not for those with a calorie phobia, as Francesinha, or ‘Little Frenchie’, is a monster conglomeration of thick bread piled high with cured ham, sausage, beef, and other meats covered in slices of cheese, and swimming in a tomato and beer based gravy with fries on the side. It may be love at first bite, but for weight watchers, this carbo-bomb containing a scandalous 1000 calories per portion will have them paying a price for their dietary infidelity! Christine and I decide it best to share a dish between us, and still waddle off fuller than a centipede’s sock drawer!

Walking past Central Square on our way home, we’re surprised to have an army ‘hi-up’ escort us inside a cordoned off area hosting a military exhibition. The Portuguese may be full of national pride, but this meager display consists of only a couple of aged planes, a marine inflatable, and a geriatric tank. However, it’s good to know they’re well equipped to defend themselves, should Luxembourg ever decide to go rogue!

We also pass by a cute little pooch trained to beg, expectantly holding a plastic cup in his mouth as his busking owner tortures the hell out of a beat up accordion. In a park nearby, another guy playing Fado music on his guitar is serenaded by a seemingly infatuated seagull sharing his wooden bench.

In the port area of Matosinhos, our salmon and calamari dinners at Casa Teresa are presented with zero greens, but nine potatoes and bread. The scurvy-prone meals here are caloric catastrophes, and combined with the town’s surplus of sugary ports and pastries, we believe Porto and portly to be synonymous. This theory seems evidenced by a plethora of pudge-muffin residents exhibiting an overabundance of flesh trying to make an escape for freedom from the confines of their clothes.

After transporting our bikes across the Rio Douro, we breathe the salty Portuguese air as we cycle along the coast to the village of Miramar and its photogenic 1686 Chapel of the Lord of Stone. Sitting atop a bed of boulders completely surrounded by beach with high tide’s rumbling surf licking at its base; the chapel has miraculously remained intact over the centuries and avoided avoiding being swallowed by the sea.

Venturing further afield today, we train 120 km through the countryside, following the Douro River to Pinhao Station in the Douro Valley. The station’s four walls are decorated with 24 blue glazed mosaic tiles from 1937, depicting typical scenes of the Duoro Valley related to wine production. This area is world class corkscrew country, and we know that today’s forecast has a 99% chance of wine!

We’re told that grapes used in the production of any wines worth worshipping are all stomped by foot. Apparently this ‘toe-tally’ labour intensive process requires a team of two dozen arms-across-shoulders stompers, whose efforts crush the grapes, but not the seeds or stems, thus reducing any bitter flavour from any unwanted debris. Fortunately, it’s always wine o’clock in the Douro, so we slide into a cozy little bar for some Grape Therapy, because like duct tape, wine fixes everything!

Our trip has been quite a humdrum affair compared to the usual escapades in Asia, but it has served as a tasty tide over until we can find something else to arouse our traveling spirits. Interestingly, at the conclusion of our Lufthansa flight back to Canada, a little glitch in the communication from our ‘English as a second language’ Captain results in his rather peculiar flight  announcement; “Thanks for staying with us for the entire flight”.

W.T. F. –  did the dude think perhaps we were contemplating jumping out somewhere over Iceland?