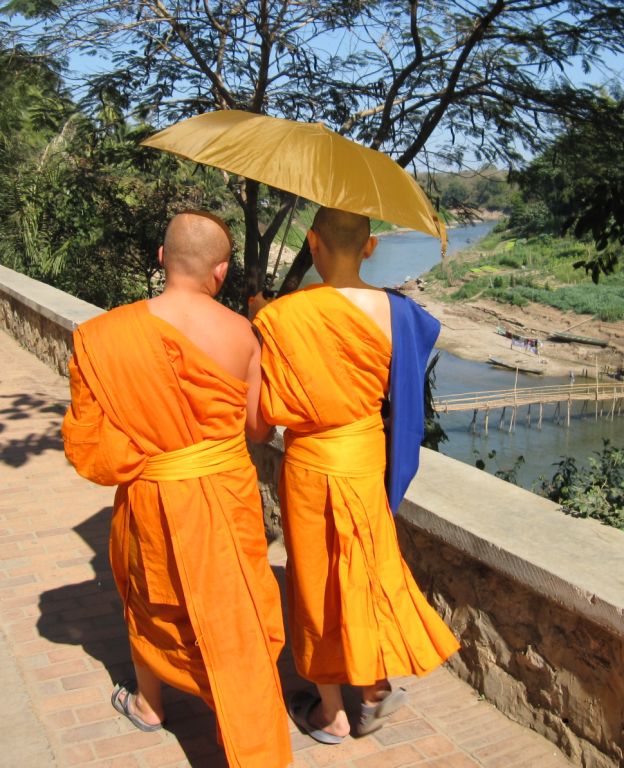 It’s December, it’s cold, and it’s time for a sun-drenched elsewhere. So, for the ‘I’ve lost count’ time, climate-friendly Asia is beckoning! Our love affair with ‘every-day-is-an-adventure-Asia’ began 25 years ago, and coincidentally, this happens to be the 25th wedding anniversary year for Christine and myself. Our plan is to round out the year marinating in the culture of the landlocked kingdom of Laos.

Immediately it becomes apparent that the usual mayhem of Asian cities is absent here in the ancient city of Luang Prabang, with the sleepy little town exuding a mellow spiritual aura in line with the multitudinous Buddhist temples dotting the landscape.

The pleasantness is remarkable for a country grappling to overcome the devastation caused when the Vietnam War violently spilled over across the border. The U.S. dropped more than 2 million tons of bombs on the country but the resilient Laotians, using a ‘lemons to lemonade’ mentality, now use those same bomb craters as fish ponds and water holding tanks for irrigating their crops.

Every morning, as day swallows the night, a drum signal from century old monasteries sets in motion a river of orange-robbed, sandal-clad Buddhist monks. Carrying ornate bowls to collect daily alms, the migration of monks glide along streets silently except for the soft swish of their robes fanning out behind them. For us, this daily ritual is as romantic a scene as any in Asia.

Officially the country is Lao PDR (People’s Democratic Republic), though consensus is PDR actually stands for Please Dawdle Respectfully! In an early morning mixture of the mundane and the magical, Lao women gently sweep the muted streets with bamboo brooms, and any words are spoken in a murmur or gentle whisper. Even the street mutts are well behaved. It’s as if the whole country has taken a Valium. There’s a saying in Asia: Vietnamese plant the rice, Cambodians harvest the rice, Thais sell the rice, and Laotians listen to the rice grow! From what we’ve seen it seems to be true; as only every now and Zen does one find such a truly special place.

At Villa Sayhkam guesthouse, we snigger reading the English translation of ‘house rules’, including rule #5 which states: ‘Do not any drugs, crambling or bringing in both women and men which is not your own husband or wife into the room for making love.’ No sir-ree, I would never consider ‘crambling’ here! During breakfast in the garden we’re serenaded by the beat of a drum and soft chanting of monks drifting through a brilliant bougainvillea hedge separating us from the Buddhist temple next door.

Exploring either by bike or on foot, we are regularly greeted by the people’s whisper-like hello greeting of ‘Sabaidee’. When we’re not burning off calories we’re ingesting them, as getting a taste of the country, we munch our way along the cobbled streets on our Lao culinary safari. Then of course, we have to stop for the mandatory massage; a pleasant hour of being pulled, poked, prodded, and pampered to perfection.

At a silk village we observe the entire process of how the ‘Queen of Textiles’ is made; right down to the wriggling white larvae doing a little munching of their own in a bed of mulberry leaves. Not to be outdone by the worms shedding silk, Christine demonstrates her exceptional aptitude for shedding cash! Coming as no revelation, it is yours truly who ends up mulishly transporting her plethora of purchases. Luckily for me, this time the ‘Queen of Spend’ is purchasing silk instead of stone!

At a ridiculous hour, I blink myself awake; silently stepping out of the room into the black of night. In a dare-devilish ‘Carpe Noctem’ mood, I am on a mission to try and retrace my route to a bombed out monastery seen yesterday while cycling, hoping to capture a quality picture at daybreak. Warily, I stumble out of town to a bridge over troubled water. With the night still holding the upper hand, I laboriously grope my way across the rickety bamboo bridge by braille with the roar of Khan River below, running full, fast, and furiously; a dicey situation focusing the mind and tightening the sphincter!

As the sky inches towards dawn, I’m immensely pleased to actually locate the monastery, and waiting patiently for daylight under the silence of the stars, I’m startled by a robed monk who appears out of nowhere, questioning my presence. Since he speaks reasonable English, we engage in a conversation wandering across many topics; becoming both teachers and students as we discuss perceptions of each other’s cultures.

Suddenly a burst of orange appears, as 11 other right-shoulder-bared monks gather outside the monastery. The fellow I’m chatting with says to me, ‘Where you go now’?  Telling him that I have no plans, his prompt reply is, ‘You come with us’. Like white on rice, I am all over this remarkable opportunity!

Swiftly and wordlessly, the twelve saffron cloaked monks and I are off, striding through the rice fields along narrow muddy paths; they carrying alms bowls, and I my trusted camera. Tagging along behind my bare footed friends with barely enough light to see, I try to keep pace and not slip, as I don’t fancy planting my nose in the muddy water alongside the abundantly sprouting rice.

As we approach the first little village several people kneel in prayer on bamboo mats, hoping for a blessing. The monks walk by the villagers collecting alms, and then stop and stand in straight line on the dirt road. Lead heavy in uncertainty as to what to do with myself, my friend sees me with a blank stare akin to a bald guy who has just won a comb, and instructs me to join the line of monks. My new robed friends begin chanting some sort of blessing for those on their knees, with me ineptly lip-syncing alongside.

I sense the locals are totally bewildered at seeing an outsider with the monks, and wonder if they’ve ever witnessed anything like this before. Villagers respectfully bow with hands raised palm to palm below their chin. One lovely lady kindly offers me rice, even though I do not have a bowl. Loath to hurt her feelings, I birth a smile while depositing her paddy product in my pocket. Then, without a word, the monks shuffle off, with me again trailing along behind. Who’d ever of thunk; Mr. Mark – ‘The Thirteenth Monk’!

This procedure is repeated at several more stops along the route, with a few interesting encounters along the way; including an inquisitive army guy riding a pink kiddie’s bike who stops, wanting to know what is going on. After making the rounds and alms finished, the monks and I silently return to their monastery.

I thank my shaven-headed friend profusely for the wonderful privilege bestowed upon me. We shake hands, and he and his colleagues withdraw back inside their temple, leaving me standing there still trying to wrap my head around what just happened. Wow; this Lao morning is a whole lot of special! Hugging my secret, I enthusiastically hike back to share my amazing encounter with Sleeping Beauty, who is still in bed.

Quite by accident Christine and I stumble upon a captivating outdoor bar aptly called Utopia. The modest entrance opens up to reveal an eclectic mix of militia ordinance, hammocks, water gardens, and a huge BBQ made from a bomb casing. This brilliant watering hole is a lovely place to chill with some liquid inspiration, while perched on a bamboo platform suspended out over the cliffs and looking down over the Khan River far below. All right then, just five more beers, and then I really must be going!

After negotiating a price for a scruffy sputtering tuk-tuk that looks as if it’s been around since Jesus was in Pampers, we bounce over wretchedly rutted roads towards the ‘Whiskey Village’. Relieved to reach the smidgen of a village, we jump out and check to see if any of our dental fillings have been jarred loose!

The village has two industries; whiskey making and weaving. Coincidentally, I too have been known to partake in a little weaving after whiskey! I digress. As well as horridly harsh ‘Cobra Whiskey’, they’re trying to flog bottles of booze ghoulishly infused with scorpions, lizards, and any other critters they’ve managed to harvest. Wisely deciding to pass on this piss, we opt for a safer option of purchasing a few scarves as gifts.

Today we travel out to the hill tribe people of the Hmong and Khmu, and la-de-da-ing through the villages, hand out toys, dolls, and dozens of pencils we’ve brought from home. We notice one lovely young girl with her baby brother in a pouch slung across her back; her dress is soiled and her face forlorn. Little girls don’t belong in frowns – little girls belong in smiles, so we present her with a nice Barbie doll as a gift.

Seeing her precious parcel, her dark eyes widen with surprise when she realizes the doll is hers to keep, and her little face births a dimpled smile that lights up the entire village. These grateful little ragamuffins are absolutely lovely, and on receiving any little item, graciously offer a thankful ‘nop’ by respectfully bowing from the waist with hands clasped in prayer-mode and fingers pointing heavenward.

On our last afternoon in this enchanting country we boat along the mighty Mekong observing locals engaging in their daily activities on the river and its shore. With the day sliding away and a sinking crimson sun hanging like a colossal red balloon over the horizon, we pensively reminisce on the magic of Laos. Top to bottom this has qualified as one of our favorite happy places in all of Asia.

In search of sand, we continue our travels through Bangkok, Phuket, and Phi Phi Island; eventually landing on Koh Lanta, a predominantly a Muslim Island in southern Thailand. Unfortunately, the trash, food, and friendliness on the island all get failing grades, and for the life of us, we have no idea why we are here. The beach and sunsets are sweet, but our accommodation turns out to be a real buzz-kill, with blood-syphoning mosquitos in a feasting mood; with an apparent passion for white meat!

After exploring all the nooks and crannies of the island our enthusiasm has withered, and with the days now just limping by, it’s time to end this meaningless Koh Lanta pilgrimage, as our hearts are simply no longer in it. Clearly we left them behind in the peaceful charm and WOW of Lao!